Lesion mapping appears a bit antiquated in the age of fMRI and EEG/MEG, but its strength for making strong inferences about brain functions remains unmatched. Because lesion patients are usually tested with neuropsychological instruments and behavioral tasks (i.e. no functional neuroimaging data), the quality of lesion mapping hinges on the comprehensiveness of the behavioral assessment. In this line of research we build upon long-time collaborations with researchers at the University of Iowa and Caltech to investigate lesion mapping of cognitive functions in a large sample of lesion patients with an unprecedented richness in the assessments of cognitive functions. 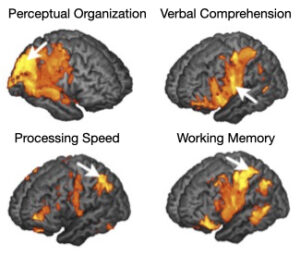 In two influential projects we were able to map out the neural basis for domain-specific and general intelligence (Gläscher et al., Neuron, 2009; Gläscher et al., PNAS, 2010). Using VLSM we were able to characterize the neural basis for 4 domain-specific factors extracted from the Wechsler Adult Intelligence Scale (WAIS) using factor analysis. Special abilities were most located in the right posterior hemisphere, whereas verbal abilities most coopresonded to left heminspehreic lesions. MOre abstract abilities like processing speed showed effects in both hemispheres.

Using hierarchical factor analysis we also extracted a general intelligence factor (g) from the WAIS data, which correlated with the structural integrity of major left hemispheric white matter projections (superior longitudinal fasciculus and arcuate fasciculus). These effects share some overlap with the domain-specific factors identified above. However, a region in the anterior prefrontal cortex (frontal pole), exhibited a unique effect, only related to g.

Cognitive control refers to a set of cognitive abilities that enables the efficient and flexible control of behavior. These include error monitoring and response conflict resolution, cognitive flexibility, efficient behavioral planning and sensitivity to contingency changes and switches in task sets. These abilities are often measured using so-called executive function tests (like Trail-Making, Wisconsin Card Sorting, Stroop, and Controlled Oral Word Associations). Our lesion mapping analysis revealed that these different aspects of cognitive control are associated with different regions of the prefrontal cortex, but that they share overlap with a common cognitive control factor in the anterior cingulate cortex (Gläscher et al. PNAS, 2012). In contrasts to this cognitive factor, which mostly relied on lateral region in the PFC, value-based decision-making as measured with the Iowa Gamling Test involved the ventromedial and medial prefrontal cortex suggesting a medial-lateral division between the motivational aspects of decision-making and those that enable flexible adaptation of decision-making and planning. 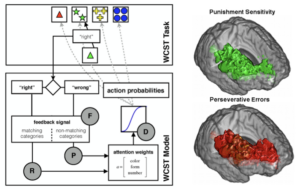 The Wisconsin Card Sorting Test is the most widely used neuropsychological test for assessing cognitive control. Using a computational model that is inspired by reinforcement learning principles, we fitted the model to the WCST data and determined 4 different parameters: reward and punishment sensitivity, choice stochasticity (akin to a softmax temperature) and attentional focussing. Lesion mapping of these parameters and several standard WCST scores revealed and overlap in the right PFC white matter between punishment sensitivity and perseverative error, one of the key indices that signifies impairments in behavioral flexibility (Gläscher et al., Nat Commun, 2019). A two-step factor analysis revealed several clusters of patients with the strongest impairments in the white matter under the right frontal pole, an area that is often associated with the highest levels of cognitive control and strategic behavioral planning.